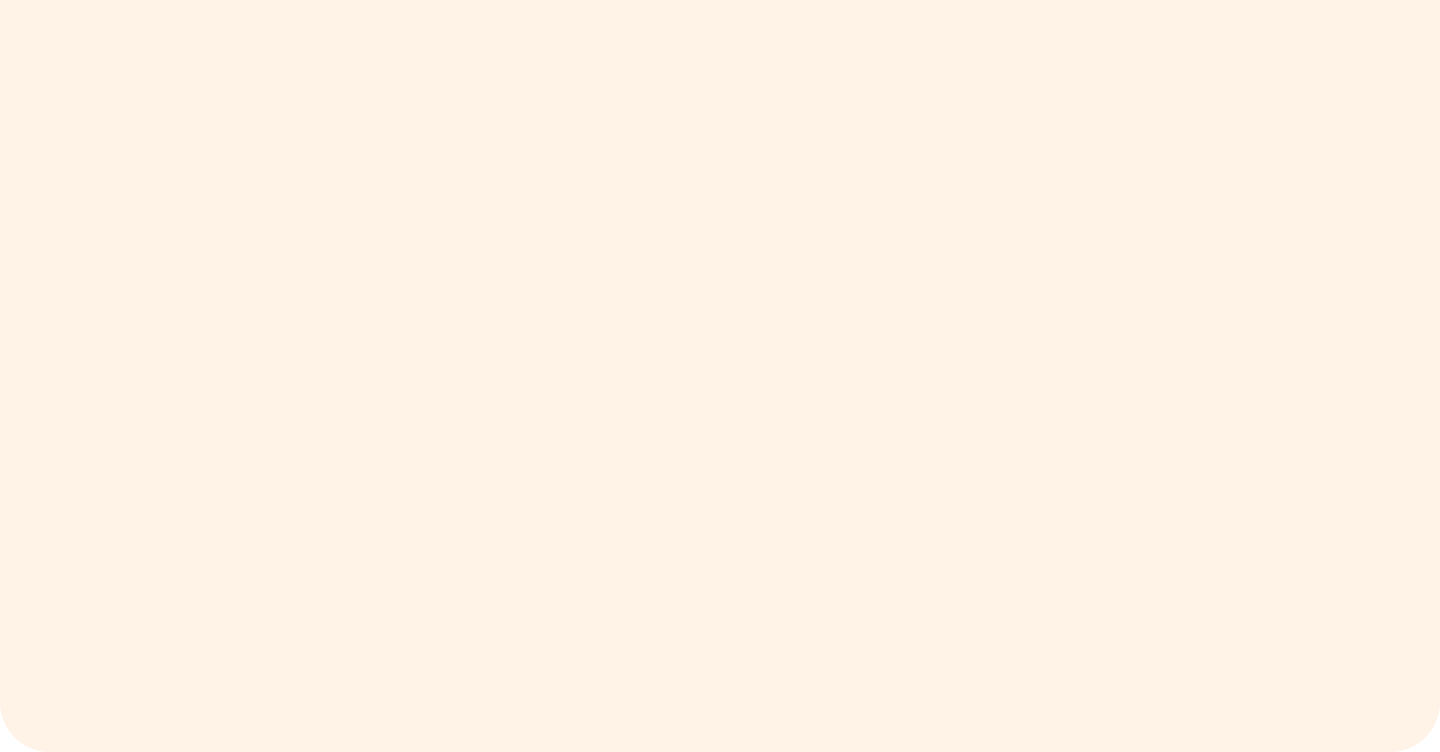 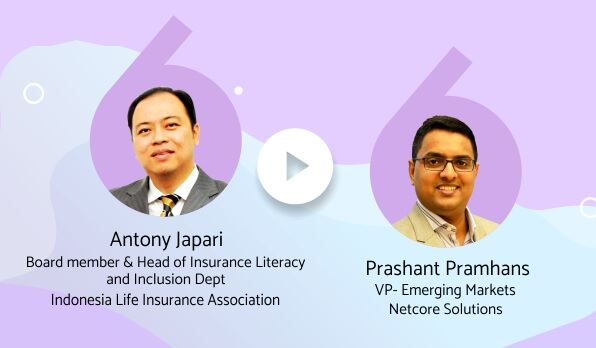 PODCAST
EP #27: Digital-first Re-growth Lessons from the Indonesia Life Insurance Association
To understand how the insurance sector in Southeast Asia is tackling the...
View more 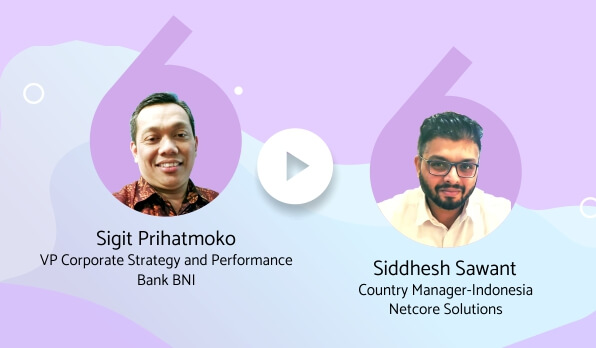 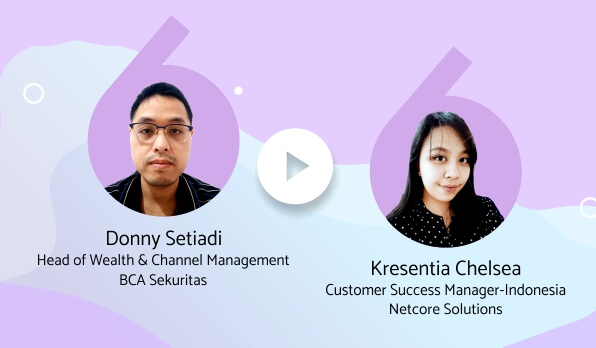 The COVID-19 crisis has pushed BFSI brands to redefine their strategic agenda, consider the lessons learned during the height of this pandemic, and review their digital transformation objectives. To understand the importance of a digital-led recovery in the BFSI sector, we caught up with Donny Setiadi, Head of Wealth & Channel Management at BCA Sekuritas, Indonesia. BCA Sekuritas is an Investment Banking subsidiary of the Bank Central Asia (BCA) which is Indonesia’s leading and most trusted bank. A Southeast Asian market leader since 1957, they have established themselves as pioneers in the digital banking arena. This unique episode that takes place partly in Bahasa sees Donny share insights on:

Tune in to understand how this pandemic has accelerated digital adoption especially in the BFSI sector; straight from one of the pioneers in this space across emerging economies.

Kresentia Chelsea (Host): Hello everyone! We have Donny Setiadi here with us today! Welcome, sir.


Donny Setiadi: Thanks also for having me over for this talk. How long have you been using wae Kowe, do you understand there is no Sip for this too sir? For what is the name, come in later when it’s changed, okay.

Kresentia Chelsea: Let’s just start talking. Yes sir, yes we are now with Mr. Donny so this is a head over, and thanks for its time. Thank you for joining this time, yes, we want to take this hour related to various businesses.

Donny Setiadi: And it is also usually different in terms of responding to this harvest for the company itself Sir, actually there is a meaningful change, how did you become like that, right? division of cooperation.

Kresentia Chelsea:  which is said to be our paycheck, we work from home, some of us work from the office later every week but those who have been at home a week will return. It’s like that file.

Donny Setiadi: Is applied to all layers of parts or only certain divisions while the other separates keep working from home or

Kresentia Chelsea:  The principles are applied in all tv, but there are certain violations for some divisions which seems less possible for me right?

Kresentia Chelsea:  Tell us a little later, sir. If at first, maybe just a glimpse for us from BCA, what about these securities from the past until now? As long as there is a father or something from the beginning until now?

Donny Setiadi: What is certain is that it was only 2013, when we saw the friendship situation, there was actually a frame that didn’t change our mindset when we were online. So we made the online application, so we started to slowly introduce disabilities to the public. One of the ways to join this program is we can go to school so that we continue to be young besides that we also start making social media. We also participate in different programs where he is a young man.

Kresentia Chelsea:  If you look at your story, it means that you are getting here, especially since there is already online trading and it involves many young people. Means Is there a shifting shift from them The usual?

Donny Setiadi:  Oh, if I know and know the stock, I have to be patient first, but now young people are even more aware and also play like this.

Kresentia Chelsea:  Do it now, it’s active, yes, to the campus to remote areas Andi is already there, but that has changed a little bit.

Donny Setiadi:  People who used to feel that this feeling is only for the middle to upper class first, now from the students who might be OK, OK, OK easy simple for my own package sir if from here it includes how big it is? Maybe the easiest way is to see from the cage brother, bro. So if it is what it is, looking at the rankings of the stockbroker rankings from Twilight, usually when you sleep, continue shopping until around 2017. That’s our warning now that I don’t bring it around.

Donny Setiadi:  Who is facing a company or company that is engaged in the stock sector, such as BCA, for now, apart from what you said, what the heck? Many say that the economy will later understand that the second semester will decline and then affect the price of the dollar and rupiah.

Kresentia Chelsea:  The challenge of Susi is the economic growth of the heart because the term automatically is the performance of the mother’s centers when I will also be asked, yes, only the effect is how big this is, right?

Donny Setiadi:  What we can see is that when the second time will be released in July, what reflects the month of April is that from the beginning, the decline in prices represents a decline in financial performance. Whether the current decline tends to be operative, which still cannot decrease the share price, will make it automatic for some time. It also provokes news that before, why does the effect fluctuate, so no. If the old one might be a bit like this, but the one who wants to open recently is enthusiastic about buying, we just have to see what? yes if he wants you to discuss if there is better we’ll wait for this.

Kresentia Chelsea:   OK Sir if it’s from Mr. Donny himself is mostly talking about marketing yes Sir, for example from the same marketing strategy you apply what are you, Sir digital and non-digital.

Donny Setiadi:  For those in the eating policy, there are actually others, but if I say we really have more, he will give me educational education about stocks in the capital market, and we will talk about business opportunities. Our application like this like this

Kresentia Chelsea:   Then, there was never the thought or plan to make this again when a brand or MI used a strategic strategy. Marketing is in the players, when we have LEDs, we have thought about applying it outside.

Donny Setiadi:  For now, what is used for me is also certain that from us, there are always steps, so we are still closed and recently YouTube has also just love, maybe less than a year, I think we have never heard anything like that. Wear it for especially Masnya said we are the field that we do, especially marketing, it is related to Husnudzon and also where if you were. Mention, for example, there is an effect, so we have a marketing car so that it can be implemented as one in my dream.

I think we can’t get into this in terms of thinking and also usually in what form is it usually new or have their desire to maybe improve.

Kresentia Chelsea:   Then for more about that, what is it, Sir to customers other than through social media, I will explain everything like that if for personal whether there are other personalities or will be given to

Donny Setiadi:  Actually we have discussed creation but we are not yet ahead, yes. Yes, yes, yes and from the point of view, apart from the previous ranking, you mentioned, what is it usually, sir, in the industry and we also miss where we can see it from where else if this is still there, it shows the size of the securities but there are some securities certain if for example, the interview is the place.

Donny Setiadi:  Which has long been established. And if we are, we are more likely to try more quality word searchers if we open an account but also sometimes we like to give the ones that are used 43. How do we push this event for them too, yes, we can see that at lunch he can get direct access there but apart from that, you can say that he will also be painted by his customers. I will be bought by in reaching
yellow rice for this sir, if from you yourself as a person, yes, from many of our friends at BCA Securities or maybe you can share them yourself. For example, so far there are things that I have to do but I believe more. To the contents of the temporary account opening, we still receive a lot of such forms or documents so he said that they are also online now.

Kresentia Chelsea:   This is online too, if I’m not mistaken this year, we will encourage people to be okay so that the top priority is right, sir. For the policy itself, it follows the government’s PSDB or has determined how long it will be, sir. Until when is not clear whether to follow the government and also let it be easy. Just from me, sir, the question and the car. Thank you very much, Mr. Doni for the time. Already given time for us to have another meeting or to continue with other things. Okay, that’s it this afternoon. 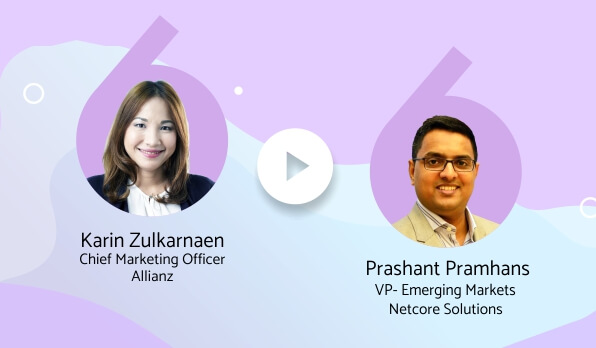