Please wait while we grab a copy for you...
Written by
Ritu Poddar
Ritu Poddar 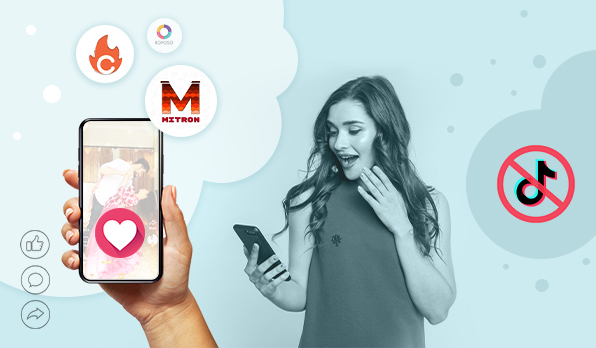 TikTok was a primary source of entertainment for millions of Indians until the Indian government banned it. The ban came at a time when most offline activities are not possible and TikTok was perhaps experiencing excellent growth.

But as the lovely poet, Robert Frost said, “In 3 words, I can sum up everything I’ve learned about life: it goes on.”

While the people at TikTok must be brainstorming ways to deal with this huge blow, the users are already moving on. Thanks to the homegrown apps that are positioning themselves as the “Made in India” alternative to TikTok.

One App’s Loss is Another App’s Gain

As soon as the ban came into effect, many Indian video-sharing apps which were running on gear one, and probably struggling to survive on low fuel, suddenly saw their engines being put into the highest gear!

A few names grabbing a good amount of attention are Chingari, Bolo Indya, Roposo, Trell, ShareChat, and Mitron. Many more are coming up as I write this article.

Most of these apps saw a meteoric rise in the number of app downloads in a matter of days. Just to get an idea – Roposo, that has been around since 2014, saw its user base jump by 22 million within two days of the ban!

The teams behind these apps have been working tirelessly to make the most of the opportunity. If you are one of them, keep reading, there is interesting and helpful stuff for you.

However, there is a catch.

If I can draw an analogy between the video-sharing apps and luxury hotels, the situation the apps are in right now is this.

Guests have arrived, all the rooms are full. These guests have had best stay experiences in the past in the most luxurious property. They are used to being hosted well, treated well with personal attention. But the hotel wasn’t prepared for a full house. If it fails to deliver the same (or better) experience, they won’t stay for long. After all, there are many hotels out there, and there are many more coming up!

You have cleared the Acquisition level. Customer Engagement and Customer Retention levels are as tough and are waiting for you. No time to waste!

Where do Homegrown Apps Stand in Comparison to Tik Tok?

“This is the digital aatmanirbhar (self-reliant) moment that most Indians have been rooting for,” said Naveen Tewari, founder and CEO of InMobi Group, which acquired Roposo.

However, these attempts may achieve limited success unless the players scale up really fast. The fact is, none of the Indian players are currently ready to fill up TikTok’s shoes in terms of handling the user base and delivering the experience that kept TikTokers hooked.

Currently, the homegrown apps have only a fraction of users that TikTok had in India. In terms of user experience too, these apps are yet to impress their users. For instance, general negative user reviews in the Google Play Store reveal that users are finding the app interface not as great, the apps consume a lot of mobile data, the camera and filters are not that good, the apps crash, the phones get heated up, etc. In a nutshell, the Indian apps have a long way to go. After all, they have quite big shoes to fill!

However, poor feedback only highlights the areas that need to be worked upon.

What Made TikTok Tick?

TikTok took the social media world by storm, by reaching half a billion active users globally, in just under 2 years. It has the record of being the fastest app ever to achieve that milestone. (Instagram took 8 years, and WhatsApp took 5 years to reach that stage). This kind of a feat cannot come by chance.

The brains behind TikTok did some real research to leverage the best of technology, and basic tenets of human psychology that underpin the offline social world. From what we can gather, what worked for TikTok was its:

“TikTok is the first mainstream consumer app where artificial intelligence IS the product. It’s representative of a broader shift.” – Connie Chan, Chinese Investor

Some Additional Strategies for the Indian Players

Why reinvent the wheel?

TikTok’s success is a global phenomenon. The Indian players who aim to dethrone TikTok, not only in India but even worldwide, have a ready-reference guide. The following points may reiterate the ones mentioned above, but just because they are important.

Focus on building and expanding the user base. Because content creators are driven by virality. So, if right now you can give users what they are used to and loved (even by replicating TikTok), you can go on to provide differentiated experiences and more as you grow.

Things to Learn From TikTok’s Pitfalls

TikTok did find itself in trouble from time to time. The boon of AI has also proven to be a bane. The company has come under the scanner for user data security issues. It was accused of collecting personal data of children below 13 years. Also, often inappropriate content gets generated and delivered to users. TikTok was also temporarily banned from India in 2019, after the app was suspected of encouraging inappropriate content. TikTok has also been charged with ignoring ethical standards. So, there needs to be a control on AI-powered tools.

Hold user data security, censorship and monitoring content and social responsibility with utmost importance. More and more users are getting aware about their personal information security.

There’s No Time to Rest

Remember the ban on Maggi? So many brands vied to replace it. But as soon as Maggi re-entered the market, people forgot everything else for their love for Maggi. It ruled hearts, just like TikTok did for Indian users.

Aman Kumar, Chief Business Officer, KalaGato said, “Although many users shifted to emulated versions of TikTok, the user base is still a loyal one, and they may shift back to the Chinese app as soon as the ban is lifted.” Quite plausible.

The fate of these upcoming apps and their shot at success is closely linked to how long the ban on TikTok lasts. Its return could easily jeopardize the prospects of the Indian players. Moreover, given the Covid-19 crisis, it isn’t easy for these start-ups to sustain and scale. But when did calm waters make good sailors?

To learn how can an AI-powered omni-channel automation and personalization platform like Smartech can be a part of amazing growth journeys, get in touch with the experts today!

About the Authors
Ritu Poddar