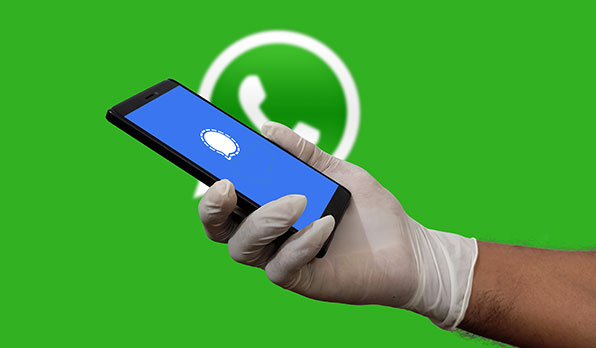 If you have landed on this page, means you have heard all the fuss about WhatsApp’s New Privacy Policy. WhatsApp has been the most popular mobile messaging app for more than a decade now. In 2020, the app projected a user base of 2 billion and a huge part of this user base comes from India. The app has been riding the instant messaging market for a long time and has been far ahead of its competitors.

However, the recent announcement about the policy changes has put this app giant in dire straits. It would be safe to say that with its new policies- WhatsApp seems to have landed itself in troubled waters, paving way for the rival apps who have set their eyes on the price (If you know what I mean).

WhatsApp has updated its terms and conditions stating the app will hereafter send marketing messages related to Facebook companies. Business firms will use the data collected from the app and other Facebook services for content suggestions, people recommendations, and ads along with service improvements.

In simple words, once the new policy is implemented, all your data i.e. your GPS location, contacts, messages, media, your entire social life will be under the surveillance of WhatsApp (as well as Facebook).

I know what you are thinking!

This news has whipped up a storm among the netizens worldwide and clearly WhatsApp did not anticipate such a backlash by its users.

The announcement of new policy has led to a global backlash, with people shunning WhatsApp and moving to a more secure application like Signal and Telegram. This outrage shaped in the form of memes and tweets encouraging netizens to switch to alternate messaging apps that promise complete data privacy and security. Not just individuals but even businesses showed their discomfort towards the new terms laid down by WhatsApp.

Netizens took to twitter expressing their rage against WhatsApp through a series of tweets and memes. Here are some of the hilarious memes that are making the rounds on Twitter.

The new policy changes has not only disturbed the users but also companies who use WhatsApp interface and API to reach their potential customers. A couple of large enterprises who use WhatsApp Business told TOI that they are planning to take matters up with the company. As they use WhatsApp regularly to transmit private data like financial statements, personal information, travel and hotel bookings etc., they are deeply concerned about their customers’ data security.

On the filp side, Indian traders’ body Confederation of All India Traders (CAIT), have strongly demanded the government to curb WhatsApp from enacting the new policy or ban WhatsApp and its parent company Facebook.

Recently the traders’ body CAIT had filed a petition with Supreme Court making a plea to direct WhatsApp to withdraw its new privacy policy.

Now this calls for some immediate damage control from Facebook!

As the phrase goes, one company’s loss is another company’s win. Following WhatsApp’s new policy announcement, rival apps like Signal and Telegram saw a sudden uptick in demand. As per an article shared by Reuters, more than 1,00,000 million users have installed Signal by now. This happened after Elon Must wrote a twitter post saying ‘Use Signal’. This little message boosted the app’s fortune, making it one of the most downloaded app on Android and Apple platforms.

On the contrary WhatsApp experienced a drastic decrease of 11% in app downloads globally.

This reminds me of TikTok’s scenario. How a ban on TikTok resulted to sudden surge in popularity of other middling apps.

Nevertheless, Signal still has some big shoes to fill in order to match WhatsApp’s gigantic reach and user base.

How is WhatsApp (or Facebook) Responding to This Crisis?

In the wake of widespread criticism from users, WhatsApp has delayed their policy implementation to May 15 instead of February 8,which was the previously scheduled date. To control the global backlash triggered by new policy changes WhatsApp has stepped up to clarify users’ dilemmas regarding the privacy policy through a detailed infographic blog post, which explains that WhatsApp has no access to users messages, call logs, groups, location data etc.

It further adds that none of the aforementioned data will be collected or shared with Facebook. The company confirms that the account will not be deleted on February 8th instead they will delay and review the policies so that people accept the terms.

The app giant has also used social avenues to spread the message across their customer base in the form of WhatsApp status.

Here are the snapshots of the same.

Is Signal Ready to Take Over The Influx of New Users?

Within days of the new policy announcement, rival app Signal garnered millions of users. But, is this new WhatsApp challenger equipped to take over the influx of new users?

The app that bills itself as privacy-focussed is facing a lot of difficulties to make room for WhatsApp’s mass exodus. Moments after Elon Musk took to twitter about using Signal, the app faced registration issues as a huge volume of users flocked to the app.

This wave of new users caused a brief delay in Signal’s sign-in verification code from network providers. The verification codes could not reach new users leaving them unable to register on the app. This glitch was solved soon and Signal was back on track. The WhatsApp rival also took to twitter to confirm the same.

This is what Signal tweeted

In another scenario, Signal suffered technical snag trying to accommodate the new users into their app. According to a report by Hindustan times, due to the huge surge in users, Signal is unable to send messages on the app. The app was apparently down due to its server capacity issues. Signal even posted a tweet about the issue mentioning they are facing some “technical difficulties”.

Signal’s CEO, Aruna Harder also said that “We have been adding new servers and extra capacity at a record pace every single day this week, but today exceeded even our most optimistic projections. Millions upon millions of new users are sending a message that privacy matters, and we are working hard to restore service for them as quickly as possible.”

How Can Signal and Other Apps Build a Great In-App Messaging UX?

Had it not been for WhatsApp’s new policy controversy, Signal might have never made it this far, this swiftly. Let’s just say that all the influential endorsements made the app fortunate enough to clear round one. But to make this new set of users stay longer, the app must redefine their approach.

Here are some steps that Signal and other apps can take to keep their user base intact.

App Onboarding/ Walkthrough: For any app owner, the most crucial thing is to get more users acquainted to their app’s full potential, easier and faster. App onboarding / app walkthroughs enables new users to self-educate them about the value proposition of the app. WhatsApp is famous for its impeccable user-friendly experience and if rival apps want to win the trust, they have to chalk out an effective onboarding strategy.

Add the Right Nudges: Now while you might think this is a part of app onboarding, this feature itself has its ‘unique’ benefits and deserves to be talked about separately. Adding nudges to your onboarding journey helps users navigate through each of app’s features in less than one minute. It is also effective in influencing decision outcomes to users based on their behaviour.

Build a USP: There are thousands of apps in the app store, why should anyone choose your app over the others? Here’s where your app’s unique feature comes to play. Take the on-going example of Signal, it’s not just the endorsements that convinced people to ditch their all-time favourite WhatsApp, but Signal’s unique privacy feature that drew them closer. So a USP is a must to drive users to your app.

Minimalistic UI and UX: A good design will always bring out the good in your app. A well-made UI helps your app load faster and enhance its performance, providing the users with a delighting FTUE (First Time User Experience). Always keep a minimalistic approach and keep it clutter-free. Clarity is a crucial component of a good mobile app design.

Invest in a Powerful Tech Stack: Initially WhatsApp was just a messaging app but what made it the king of apps is its rich app architecture and irresistible user experience. In short, to compete with a giant you need to be one first, and that’s only possible if you have a robust technology at your disposal. Technology is the centrepiece of any app. No matter how excellent is your design, USP or your journey, it would never turn fruitful unless you possess a powerful tech stack.

Will Signal Make a Good Alternative For WhatsApp?

But, is Signal better than WhatsApp?

Is it fully secure?

How does it work?

Signal is a privacy driven app which makes it an ideal choice for privacy-lovers. However, when it comes to app features and users app preference, WhatsApp is still ahead of the game.

Here’s a quick look at Signal and its features and what makes it a strong contender for WhatsApp:

Looking at all these factors, Signal might definitely make an ideal app for privacy enthusiasts. And the debate on whether it is better than WhatsApp or not? Well, we better leave that for you and your social circle to decide. After all, the end decision will always remain with (u)sers.

If you wish to learn more on how to create a great first time app experience for your messaging apps, get in touch with us, today!

This website uses cookies to improve your experience while you navigate through the website. Out of these, the cookies that are categorized as necessary are stored on your browser as they are essential for the working of basic functionalities of the website. We also use third-party cookies that help us analyze and understand how you use this website. These cookies will be stored in your browser only with your consent. You also have the option to opt-out of these cookies. But opting out of some of these cookies may affect your browsing experience.
Notwendig Immer aktiviert