Please wait while we grab a copy for you...
Written by
Mariam Hazrat
mariam.hazrat

The CMO Digest: Leading vs. Managing at the Time of Crisis 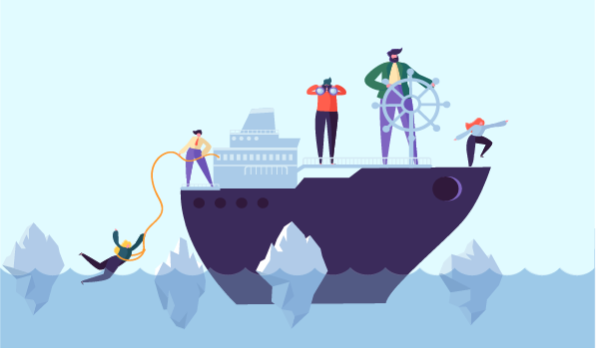 No manual could guide a leader through a crisis so disruptive and complex. But some stories impart lessons that could be valuable in times like these.

The BP oil spill in Mexico, 2011 was both a human and environmental tragedy. Gallons of oils were discharged in water and 11 workers lost their lives. The response of the then CEO, Tony Howard was so lacking that the organization lost its credibility.

After the financial crisis of 2007-2008, the automobile giant, Ford was close to declaring bankruptcy. At least this is what the industry experts predicted. But to everyone’s surprise, Ford made a dramatic turnaround after the crisis. Alan Mulally’s leadership led Ford through the tough times and Ford could regain its standing within the industry.

Clearly, a leader’s action during the time of crisis can make or break a company. Being the leader you either end up sinking the organization faster than a ship with a leak or you lift it through the crisis and emerge as winners.

If a situation like the Coronavirus crisis could be looked upon like an event unfolding over an arc of time, it would have a beginning, middle, and end. The beginning was relatively stable. The middle, which we are going through now, is full of chaos, and the end is yet to be known. As the end will unfold in the future, some organizations will be resilient while for some it will be catastrophic. The actions of leaders amid this crisiswill signiﬁcantly determine their fate.

The predicament of CMO’s and their teams

Weathering the current storm, CMO’s are handling critical tasks like avoiding tone-deaf marketing messages, keeping the marketing engine running,and most importantly, motivating their teams in these uncertain and scary times. And these teams are in themselves facing challenges like generating quality traffic, tackling overflowing information, struggling to strike the right balance in the marketing technology stack and to make things worse they don’t have enough resources.

In this situation, will mere management help you sail through? Of course not. It’s not just survival you aim for. You want to revive after the worst is over. Managing the current scenario by addressing immediate needs and making quick decisions is important no doubt. But you also need to guide your team to the best possible outcome. This is when you lead them into the future. As leaders, you have to focus on what’s coming to you next and be prepared to meet it head-on. Look beyond the immediate and obvious challenges and think about the future standing ahead of you so that you and your team can deal with it efficiently.

The DO’s and DON’Ts in a CRISIS

We are all in uncharted waters full of speculation, struggling to find the right approach, and unclear on what we should or shouldn’t do. While you might find endless articles written in these times on what should be done, there are a couple of things leaders tend to do instinctively, and they must definitely not do those. Here are a few don’ts you can catch up on:

It’s inbuilt in us to act defensive when faced with any form of threat. To protect ourselves we instinctively narrow down our focus to the immediate foreground. But, as marketing leaders you need to consciously pull back and allow your vision to expand into the mid-ground and background. Take a look into the future as opposed to just managing the present. Don’t limit your attention to just immediate difficulties. The future is filled with uncertainty, challenges, and opportunities and you need a broad and holistic picture of the possibilities (good or bad) that lie ahead. You will have to take tough calls and continue providing support and guidance to your people.

With uncertainty and pressure around, it’s only natural to want to control everything. This is the point where most leaders tend to fall into the trap of over-centralizing the response to the situation. Far from making things better, over-controlling only ends up creating more stress. Not just for you, but for your team too. Don’t create new layers of approval for minor decisions because then you run the risk of weakening the morale of your team members. Moreover, at the time when actions need to be swifter, the bureaucracy slows down the functioning. Let the people know what you expect from them, and what the organization expects from them. Make it known which decisions only you can make and delegate the rest to your team. Provide clear guiding values and principles and forego the temptation to control and do everything yourself. Also, say no to too many meetings.

People are worried about losing jobs, keeping up their finances, and their health and safety. They’re under immense emotional and economic pressure right now. Being constantly bombarded with the news of increasing cases, and the social distancingnorms that are keeping them away from friends and relatives is adding to the negativity by the day. With these daily struggles, the inertia in work is bound to increase as people wonder if there’s any point in even trying. Leaders are inclined to get trapped in the idea that focusing on the daily metrics, revenues, reports and costs could help them achieve the best in this critical business situation. But now is the time to show empathy to your team members. More than ever. Obviously, business goals play a crucial role but they can only be achieved through the coordinated efforts of the team. So, keeping people united and uplifting their morale becomes a turning point to get through the crisis.

We are not going to give you a list of best practices or behaviours you must demonstrate at the timeof crisis. But since the situation we are in is unprecedented, we need to remember and follow certain points.

We are all pining to go to the office and brainstorm ideas with our teams over a cup of coffee in the cafeteria. The reality is, there are remote chances of that happening anytime soon. While the government has relaxed the guidelines of the lockdown, organizations would continue with remote working with only a few employees in the office to avoid health risks.

As per a survey in the bestselling book, Primed to Perform, How to Build the Highest Performing Cultures Through the Science of Total Motivation by Neel Doshi & Lindsay McGregor, the authors found that total motivation of people who worked from home versus the ofﬁce, people working from home were less motivated. “Even worse, when people had no choice in where they worked, the differences were enormous.”

But remote working is becoming the new normal and while there are many tips out there on how to increase productivity and efficiency of work-from-home performance, the real success of it lies in understanding the changed routines of employees. Working from home is very different now. People need time to home-school their children, deal with other household chores, and give time to their families and many more commitments. Leaders need to allow flexibility, in the real sense.

We have crossed the ﬁrst hurdles of setting up work from home procedures, tools, and schedules and getting the teams accustomed to the new way of working. But this was just the ﬁrst step towards creating a remote working environment. The need to keep the teams motivated remains, whether your employees work in ofﬁce or remotely. Given the current uncertain times, it is more critical than ever to keep the teams’ morale high. Also, people are feeling isolated, desperate for some type of normalcy right now. While social distancing continues, a virtual Friday evening Coffee Chat or a Monday Morning chit chat call is important to maintain the sense of camaraderie amongst people. Time and again, interact with them at a personal level. Encourage them to build their skillset. Being more explicit about feedback and appreciation can go a long way in these times. Make them feel valued. Invest in them. Inspire them.

People are waking up to terrible news of downsizing, pay-cuts, appraisals getting canceled, and even businesses shutting down. They aren’t just worried about the health, safety, and ﬁnances, but also about their job security. You need to keep them informed about the real situation in the organization. A crisis isn’t the time for surprises – good or bad. Nobody knows what is going to occur, and as a leader, talking about that ambiguity is a vital part of leading people through this complicated and unclear picture. Trust them with the truth and they will have your back. Also, extending the point mentioned earlier, do not set unreal targets for the team. Since the marketing team is the front-runner, there are heightened expectations from you for generating leads, producing content, conducting virtual events, and so on. Ensure that your team isn’t stressed out in the already stressful times.

We at Netcore interacted with several marketing leaders across industries to understand the effect of COVID-19 on marketing, and compiled all the expert opinions into this e-book: Crisis Conversations: Marketing Leaders Reflect On The New World Order.

Everything you’ve planned might have been disrupted by the novel virus. As a leader, the onus lies on you to lead and not simply manage your team during these pressing times. Keep the bigger picture (long-term) in mind and let it be the guiding force, the North Star that guides the decisions you make today, tomorrow, and the days yet to come.

About the Authors
Mariam Hazrat

This website uses cookies to improve your experience while you navigate through the website. Out of these, the cookies that are categorized as necessary are stored on your browser as they are essential for the working of basic functionalities of the website. We also use third-party cookies that help us analyze and understand how you use this website. These cookies will be stored in your browser only with your consent. You also have the option to opt-out of these cookies. But opting out of some of these cookies may affect your browsing experience.
Notwendig Immer aktiviert