Gamification in Mobile Apps – The Pathway to Boost Engagement, Retention, and Virality 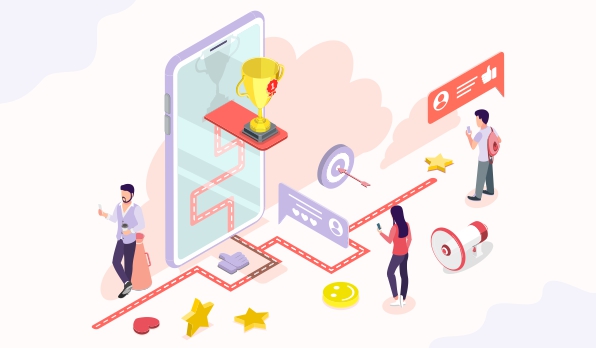 For quite a long time it was enough if your app was fast, stable, and occupied a reasonable amount of space. That is no longer the case. The apps that people spend the most time on – Facebook, Twitter, and Instagram – have upped the game in ‘user experience’. Your typical users are turned off by a poorly designed app that doesn’t engage them. The higher expectations result in close to a third of your app users uninstalling in the first 30 days. And that’s precisely why “gamification” has become popular.

What is App Gamification?

Gamification is the application of game-based elements and game design techniques in non-game contexts. App gamification involves incentivizing your users to engage with your app using methods and elements that are typically associated with game design. The end goals of any gamification exercise include higher traffic, increase in repeat visits, and higher engagement.

Duolingo is a language learning app with a 4.7 star rating on the App Store from over eight hundred thousand reviewers. It is extremely popular, to say the least. Zan Gilani, Associate Product Manager at Duolingo, associated the success of Duolingo to gamification. Below are a couple of methods through which Duolingo has gamified their app.

Progress indicators are everywhere on Duolingo. Language learning is often tedious with little to no reminders on the progress the learner is making over time. Duolingo’s indicators break down the large, often nebulous, goal of learning a new language down into smaller achievable daily goals or tasks. Users can come back every day and stick with these goals, filling up their progress indicators. On the flipside, the indicators go down over time if the associated skills aren’t regularly engaged with, as suggested by Duolingo.

Duolingo also has achievement badges that can be shared on social media. While these don’t have any monetary value, users are extremely attached to it due to the effort that went into achieving it. These badges, and the thirst to collect more, serve to increase revisits to the app. In fact, the ‘streak’ mechanism in Duolingo – which indicates how many consecutive days the user has visited the app – has become a popular social bragging indicator for Duolingo fans.

Have you ever seen someone who was excessively obsessed with the number of steps they had walked in a day? Fitbit effectively started the craze and continues to ride it with great success. What does it do right?

Instead of giving out mundane badges on reaching the 10,000th step for the day, the Fitbit app went the extra mile to assure users of the progress they’re achieving. Who wouldn’t be excited to learn that they’ve walked the equivalent of the distance from one pole to another? This innovative reward also makes it hard for Fitbit users to move to another fitness tracker – due to the fear that they would lose their hard-earned progress! For the app and for the Fitbit watch, these badges serve as a barrier against the competition.

Nothing drives a fitness enthusiast like a good competition. But you can’t run a race every day – can you? Fitbit took leaderboards to its customers and made it social. So if any of your friends has a Fitbit, you could compete with them on the number of steps you have walked, every day, for the whole year. This type of gamification causes Fitbit customers to develop an obsession towards a healthy habit and a higher engagement on the app – a win for everybody involved.

Google Pay powers in-app and tap-to-pay purchases, enabling its users to make payment with smartphones, tablets and smart watches. As a digital wallet platform, Google Pay has seen quite a lot of adoption and usage due to its excellent reward and social system.

Instead of giving you a random reward on making payments, Google Pay inserts an extra step of asking users to ‘scratch’ a card. These cards can be collected, at random, on making payments through the app. While these extra steps might seem superfluous at first glance, the action of collecting and scratching cards has become a popular attraction. Do note that these rewards need not be completely random. In many cases marketers can and do control who gets the reward and when.

How Can I Gamify an App?

Right from the first user interaction, your app should make the goal amply clear. Unclear goals lead to wrong expectations and then to unhappy users. For example, Todoist makes it amply clear that it will help users track their work and get productive. With those expectations set, it includes ‘karma’ as a reward towards reaching deadlines. Achieve a deadline and you’ll have positive karma. Miss it and you’ll get negative ‘karma’. All ‘karma’ is in service of the larger goal.

Your app and its gamification must be geared towards the audience you are targeting. Their interests, age, and persona can affect the language you will use while gamification. The difference is obvious while comparing the rewards given by Nike’s fitness tracker and Fitbit’s app. Nike’s is a lot more serious and athlete focused, while Fitbit is a lot more casual.

Bragging rights help engagement. While some might lament that the like button ruined the internet, it’s a fact that Facebook receives the most engagement through notification about ‘likes’ on a user’s post. Similarly, you will see success if you allow users to brag, like and engage on your app with others on a similar journey. A great example is ‘Freeletics’ which has formed a cult-like following who regularly update, share, and even come together to do 10 million burpees in 10 days as a community. Encouraging users to share their progress on social media also helps to increase awareness and installs of the app.

Remember that you aren’t building the world’s most complicated game in an app. Your app seeks to solve a problem or support a need. Your app gamification should be a means to the goal and shouldn’t overly complicate your app beyond recognition. Keep it simple.

Rewards are always important in any gamification, and hence you should carefully design them to be attainable and ‘real’. By real it doesn’t mean that you need to reward your users with a discount or a cash prize every time. It means that you need to reward real progress. A flimsy reward that is undeserved can turn off most users.

This might be a bit counterintuitive. It is as important to penalize undesirable actions, as to reward desirable ones. When your users are in danger of losing their ‘streak’ or getting negative karma or leaving their movement goal unfinished, they’re likely to get more engaged to your app. These penalties serve as a strong psychological disincentive to drop-off, and eventually uninstall, your app.

Actively collect feedback from your user base. Most users will choose to leave your app to find another rather than comment on their dissatisfaction. And those who do give you feedback often represent a large number of customers who had uninstalled. You check your feedback for valuable insight that would help you improve your app gamification strategy.

App Gamification can help you, the app marketer, and your users in multiple ways. It might help to remind yourself of a few before you set forth on the gamification journey.

Despite the advantages listed above, you’d do well to remember that gamification is a tool to improve your app experience. The game isn’t and can’t become your app.

Like I hope it has been made abundantly clear in the above piece, gamification can be an excellent tool to improve your mobile app. And if you’re stuck at any stage, Netcore can help you. Reach out for demo.